The Moon Car is a nickname given to a yellow Rolls Royce Silver Ghost touring car which was used in the 1924 Pier Head shooting in Cobh.  Believed to have been stolen, the car had been specially adapted with the addition of internal armoured plating and two machine gun mountings, one at either side behind the front seats. 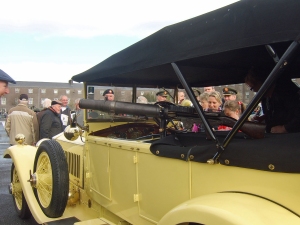 There car is said to have got its name from its late-night patrols along the roads and byways of Cork city and county looking for spies and other enemies of the IRA’s Cork No.1 Brigade during the Irish War of Independence and Civil War.  After its role in the Cobh attack it was seen leaving the Great Island upon which the town of Cobh is located. It was later said to have been seen heading up the road to Fermoy.  It was to be another 57 years before the car was seen again.  Through some dogged detective work by a local historian, the remains of the car were discovered buried in a farmyard near Bweeng, some 30 miles (48km) north west of Cobh and 17 miles (28km) north of Cork City.   All that remained of the car was its rugged chassis and its gearbox (the latter was later stolen).  The car had been burned out before being buried and the rest of the car had either been destroyed in the fire or had rusted / rotted away in the intervening years.  After that the car remained in a scrapyard for more than a decade before its importance was recognised and it was eventually sold to motor restorer James Black from Co. Tyrone who painstakingly rebuilt the car from the ground up using original Rolls Royce parts located and purchased in numerous countries. Mr. Black had previously restored the armoured car Sliabh na mBan (which had accompanied Michael Collins on his final journey before his assassination at Beal na mBláth in 1922)  on behalf of the Irish Defence Forces.

Death on the Pier, in addition to examining the Pier Head shooting of 1924 also looks at the history of the iconic Rolls Royce Silver Ghost which is widely believed to have been used in the attack. Its succession of owners, the manner in which it was procured and the story of its exploits is a fascinating tale in its own right. 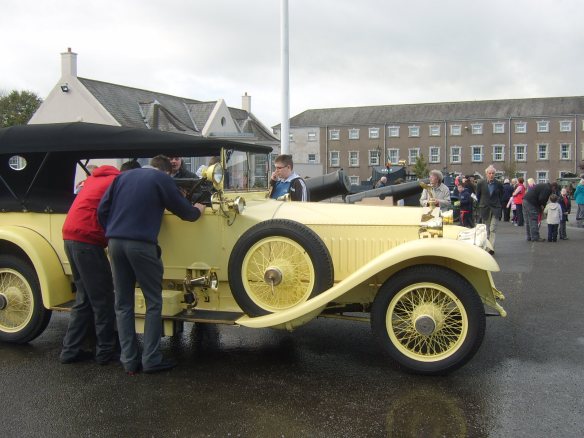 The “Moon Car” on a visit to Collins Barracks, Cork in 2013 (Photo: John Jefferies)